At the beginning of the First World War the German U-boat had become a major threat. Its large-scale destruction of merchant shipping caused not only great loss of life but also a fear that the British population would be fatally starved of materials and food.

Between 1915 and 1918 the Admiralty Experimental Establishment Station located at Hawkcraig Point in Aberdour on the Firth of Forth was the centre of a highly concentrated effort to defeat the German U-boats. It was the Navy’s main hydrophone research and training base. These hydrophones (or underwater microphone receivers) were the forerunner of today’s sophisticated sonar systems.

The naval establishment was named HMS Tarlair. The work carried out at HMS Tarlair is of local and national interest. During its short period of operation, major technological advances were achieved, not only in the detection of submarines, and it was one of the first instances of collaborative work between civil and military scientists and researchers. The staff from HMS Tarlair were also responsible for fitting submarines with hydrophones and issuing special sets of hydrophones to the 1,500 drifters and motor launches in the Auxiliary patrol, which was the major part of the Navy’s anti-submarine force. This is not only the story of the development of new technology, but also of the characters and personalities involved.

In ‘Listen Up!’ Diana Maxwell draws together for the first time local and national records with personal recollections of people who lived and worked around the base.

Little remains now of the base, but there is a leaflet available that guides you around Hawkcraig Point, the site of HMS Tarlair, which is on the Fife Coastal Path in Aberdour.

This resource is held by:
Aberdour Cultural Association 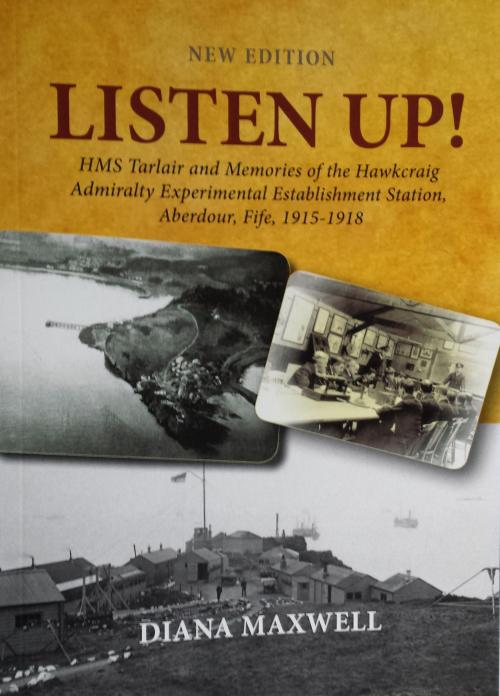