What if Prince Charles had won at Culloden?

This year’s NTS / 1745 Association Lecture, held on the eve of the annual Culloden commemoration, is to be given by Dr Christopher Duffy, at NTS’s Culloden Visitor Centre at 1:30 PM on Friday April 17th 2020. It is entitled “What if Prince Charles had won at Culloden?”

Christopher has dedicated much of his time in latter years to the interpretation and conservation of the Culloden battlefield, and has waged a valiant fight to preserve it from intrusive developments that threaten its integrity.

His talk is open to the public, and will run from 1:30 PM to 2:30 PM. Doors will be open for people to take their seats from 1 PM onwards. Christopher’s description of the talk is as follows:

“Charles Edward Stuart was a complicated man; his aim was always to take the thrones of England, Ireland and Scotland. His defeat at Culloden effectively ended his quest for the thrones. This talk will explore what the consequences of a victory at Culloden would have been for Charles, the Jacobites and ultimately Scotland.”

Christopher’s work will be familiar to many. He is the author of Fight for a Throne and widely regarded as the leading living authority on the military campaign. His talks and his writings are underpinned by meticulous research, characterised by clarity and lucidity, and leavened by a dry sense of humour as he casts an astute eye over our shared history and the people who shaped it. Further details of his career and publications is given at Wikipedia on

Tickets for Christopher’s talk can be obtained at 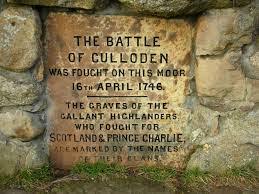