Walking with Charlie: Treading in the Footsteps of the Bonnie Prince

This year’s lecture will challenge the caricature of Prince Charles Edward Stuart as the effete figure represented in the notorious 1964 “docudrama” Culloden and more recently in the TV series Outlander.

“Whatever you may think of the Prince’s abilities or otherwise as a military commander, these portrayals are a travesty of the man he must have been,” commented Michael Nevin, Chairman of The 1745 Association, who will introduce this year’s lecture. “The popular picture of the Prince as an effeminate weakling is a hangover from eighteenth century Hanoverian propaganda. There is no way that such a man could have mobilised the support he did, or completed the gruelling odyssey from the Highlands to Derby and back.”

So what kind of a man was the Prince? This year’s speaker, Steve Lord, author of Walking with Charlie, will consider the clues provided by the journeys that the Prince made across Scotland in 1745/46. Generously illustrated with slides and informed by anecdotes of his own intrepid journey along the same paths as the Prince, Steve will tell the story of how he went back in time to learn the truth about the physical reality of the Prince's travels.

Tickets can be obtained at:

Note: Ten journeys will be covered in the talk, as set out below.

1. From Dalilea to Glenfinnan across Loch Shiel: A journey of 16.5 miles that the Prince completed on August 19th 1745, to raise the Jacobite Standard.

2. From Glensulaig and Fassfern to Glen Loy Lodge: A march of 20 miles that the Highland Army completed on August 23rd and 24th 1745, avoiding the Hanoverian forces encamped at Fort William.

3. From Gairlochy to Invergarry along the Great Glen Way: On August 26th and 27th 1745, the Prince led the advance of his Highland Army on a march of 16.5 miles.

4. Over the Corrieyairack Pass to Melgarve: From Invergarry, the Army advanced a further 15 miles across mountainous terrain on August 28th 1745.

5. On February 15th 1746, the Prince completed a 9-mile march from Kinveachy Lodge to Slochd via Sluggan Bridge, Inverlaidnan, on a route mostly parallel to the current route of the A9.

After Culloden: The Prince in the Heather

6. In the immediate aftermath of Culloden, the Prince completed a very arduous journey of 20 miles from Loch Arkaig (Strathan) through Glen Pean to Oban and Meoble on April 18th and 19th 1746. Steve comments that, “This walk must not be undertaken by anyone other than a confident and well equipped walker.”

7. Staying on step ahead of the pursuing Redcoats, the Prince made an expedition to Glen Corradale between May 14th and June 6th 1745

8. Between June 18th and June 21st 1746, the Prince made a very arduous 12-mile journey from Strathan to Sourlies through Glen Dessarry, avoiding a "redcoat cordon" that had fanned out between Loch Quoich and Kinloch Hourn. Steve comments that “This is very, very hard going with no marked or recognisable footpaths.”

9. Between July 24th and July 28th 1746, the Prince completed a difficult 20-mile journey from Ceannacroc Bridge to The Cave at Glenmoriston.

10. Finally, between August 28th and September 13th 1746, the Prince travelled from Cluny’s Cage near Loch Lagan to Loch Ericht via Loch Pattack, an arduous journey of 18.5 miles. 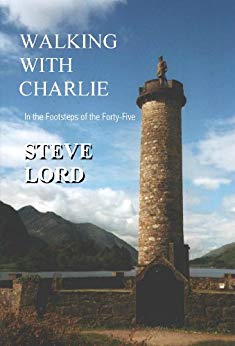