Scotland's Lost Genius. The stained glass of Alf Webster and some Galloway connections

On 14th November Graham Finch will explore one strand of the development of stained glass in Scotland from the mid 19th century to the mid 20th century, beginning with the opening of a studio by James Ballantine in Edinburgh in 1837. This produced the first stained glass made in Scotland since the Reformation. One of his apprentices was Stephen Adam who set up his own studio in Glasgow. Adam's work was admired by EA Hornel who possessed a couple of small pieces at Broughton House. There is an Adam's window in Twynholm Church.

One of his Adam’s first apprentices was Alf Webster who he eventually made his partner. Unfortunately, Webster, one of Scotland’s greatest ever stained glass window artists, was killed at Ypres in 1915. His widow, Maude continued to operate the studio and they made the war memorial window in Twynholm Church.

Eventually, Alf's second son Gordon took over and was a prominent stained glass artist in his own right. There is a Gordon Webster window in Greyfriars Church, Kirkcudbright.

Graham’s presentation will illustrate work of all the artists mentioned above with a particular focus on the two Alf Webster windows in Cadder Parish Church in Bishopbriggs and on two war memorial windows there also made by the Stephen Adams studio when it was under Maude Webster's management.

As well as the Galloway connections there will be references to Sir Harry Lauder, the radio detective Paul Temple, and the managing director of the Hyde Park Locomotive works in Springburn! 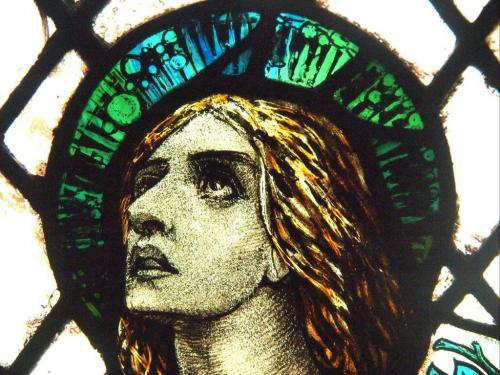