Gartmore Heritage Society and Edinburgh University Press are very proud to present the launch of a new, and highly contentious book at Gartmore Village Hall, on the 6th of May (7.30pm for an 8pm start).

Graham was one of the most influential Scottish politicians of the late 19th and early 20th centuries, and known as "the most contentious, controversial, and contradictory Scot of his generation”. Born in 1852, he was a radical political campaigner who founded the Scottish Labour Party with Keir Hardie in 1888, and was later instrumental in founding The National Party of Scotland in 1928, a predecessor of the Scottish National Party – becoming honorary President of the SNP. Cunninghame Graham, also a writer, journalist and adventurer, was elected as the Liberal MP for North West Lanarkshire but, after witnessing the poverty and destitution among the mining community, he rebelled against his own party. He was an outspoken anti-racist and anti-imperialist who, at the age of 62, volunteered for service in WWI, and was awarded the title of Colonel. Following his death in Buenos Aires in 1936, his body lay in state and his coffin, followed by thousands of people, was put aboard the ship he planned to sail home on. He was buried in the ancient priory on Inchmahome where his grave can still be seen. 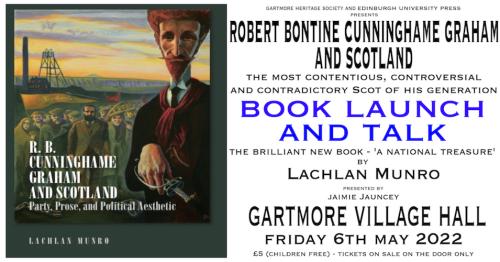