Interested in the historic burghs surrounding the city of Glasgow and want to find out more or share your stories with others? Join the Maryhill Heritage Group to learn more about this historic burgh and attend a variety of heritage events. There is more to Maryhill’s history than you might expect!

Maryhill has a unique heritage amongst the historic burghs surrounding Glasgow. Developing as an industrial area in the 18th century, it became a burgh in 1856 and was independent from Glasgow until 1891, when it was incorporated into the city’s council boundaries. Rather than being associated with one industry, Maryhill was home to several which sprung up during the 18th and 19th century with the opening of the Forth and Clyde canal. As a result, the area was a hive activity and possesses a rich and diverse built and cultural heritage.

To find out more, join us for the first Maryhill Heritage Group meeting on Thursday 14th January at 5pm until 6pm at Maryhill Burgh Halls. Joining is free and you don’t need to be a local history expert, all you need is curiosity!

The first meeting will involve the group getting to know each other (tea and coffee provided) and a discussion of possible heritage activities and events.

If you would like to join and come along to the group meeting, let the Maryhill Burgh Halls Heritage Team know by emailing heritage@mbht.org.uk or call us on 0845 860 1878. 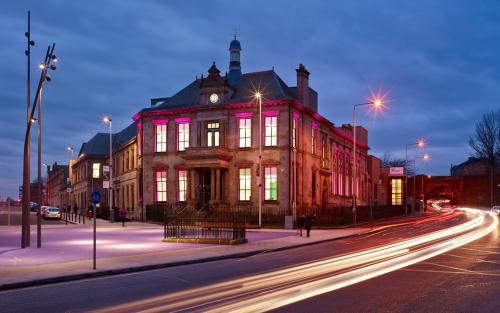