APOLOGIES. POSTPONED DUE TO COVID. rescheduled for January - COVID permitting.

Maps are everywhere: on walls; hand held; as city plans for tourists; on TV as weather forecasts; in our cars; bound together as atlases; used in classrooms; stored and looked at on computers and satellite devices; and in our heads as we walk around our neighbourhoods or journey to work. Today we simply use route planners to navigate from A to B, but in the past maps were definitely not used this way. They functioned as statements or expressions of political authority and were not necessarily accurate regarding the shape of a nation, but were powerful symbolic representations of it. So important and valuable was the information they contained that they came to be regarded as state secrets.

Roy’s map is a national treasure - one of the most famous maps of Scotland and one of the most important parts of Scotland’s heritage. It was highly significant to the Scottish Enlightenment and was a major influence in the early history of the Ordnance Survey.

It describes a Scotland where little had changed since medieval times, showing the roads, bridges and settlements in Scotland as they were in about 1750, and gives a unique, detailed record of a now lost landscape. Within forty years of its creation the Agricultural and Industrial Revolutions had taken hold, emptying the countryside, expanding the cities, and changing the landscape of Scotland forever.

During the extremely dangerous times of the 1715 and 1745 Jacobite rebellions the British Government were shaken by the absence of any proper roads and bridges in the Highlands. There were only one or two roads suitable for wheeled traffic in the entire country - the rest were a network of unmade pathways crossing the mainland and most rivers were crossed by fords, a deadly procedure in freezing conditions. Lowlanders viewed a voyage to the Highlands as a perilous excursion and frequently made a will before setting out. Scottish gentry always sent their servants first. English visitors were virtually unknown, and their gentry knew more about the West Indies and Africa than they knew about the Highlands!

If the map had been created any earlier there would not have been the skills or knowledge to illustrate such detail and precision; had it been made later it would have recorded a completely different picture.

Gartmore and Gartmore House, with its extraordinary layout, are featured on the Map, but curiously it does not include any of the roads or bridges in and around the village as we know them. It features homesteads and settlements which are still with us today, but many have been long forgotten.

Maps tell their own fascinating story and are themselves the very ’stuff’ of Scotland’s intriguing history.

So be different: Switch off your television set, be sociable, and come and do something more interesting instead. Join us at the Black Bull to discover more about the Jacobite Rebellion, the Pacification of the Highlands, and the significance of General Roy’s Military Map. 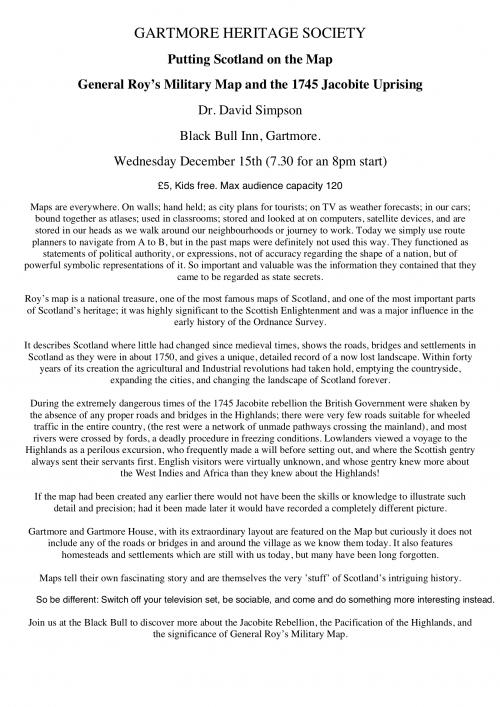