The High School of Dundee

An independent, co-educational day school situated in the heart of Dundee city centre. The School provides nursery, primary and secondary education to just over one thousand pupils and its foundation has been dated back to 1239.

The School has origins in the Grammar School of Dundee, which was founded by the abbot and monks of Lindores Abbey after they were granted a charter by Gilbert, Bishop of Brechin, in the early 1220s. Their rights were confirmed by a Papal Bull conferred by Pope Gregory IX on 14 February 1239. It is from this Bull that the School's Latin motto "Prestante Domino", translated as "Under the Leadership of God", is taken.

Famous pupils of the Grammar School in early times include Hector Boece, first Principal of the University of Aberdeen, and reputedly, William Wallace, the Scottish patriot.

In 1589, the School moved to its first long-term home in St Clement's Lane, remaining there for two hundred years. In 1789, it shared a building in School Wynd with the English School, which had been founded at the beginning of the century. Another school, Dundee Academy, was opened in the Nethergate in 1785.

In 1832-1834 the Main Building, with its distinctive Doric pillars, was built entirely from public subscription to house Dundee Public Seminaries, and the three schools were merged. The name 'High School of Dundee' was adopted in 1859, when the School was granted a Royal Charter.

The Constitution of the School is embodied in 'The High School of Dundee Scheme, 1987' and sanctioned by an Order of the Court made under the Education (Scotland) Act 1980, in May 1992.

In July 2007, the High School of Dundee was the first school in Scotland to pass the charity test under the requirements of the Charity and Trustee Investment (Scotland) Act 2005, and thus have its charitable status formally confirmed by the Office of the Scottish Charity Regulator (OSCR).

To ensure that current and future generations can easily access and connect with the School's past, a digital archive of the School's historical memorabilia is being built. It is an ongoing project which will continue to grow as we save more archival materials online. To view some of the artefacts and materials, please follow the link below:
http://www.archive.highschoolofdundee.org.uk/ 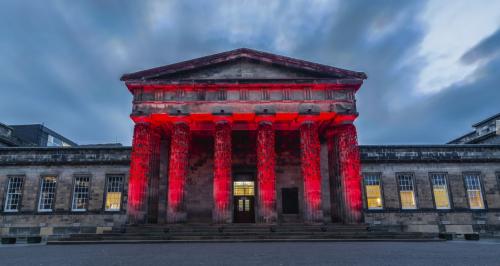