The Argyll Papers at Inveraray Castle

The Argyll Papers at Inveraray Castle are the family and estate archive of the Campbell family, dukes of Argyll. The earliest document dates from the 13th century and is still growing.

The contents of the archive are wide and varied and reflect the historically important role of the Campbell family in Scottish, British and international affairs. From the 14th century onwards the earls and, later, dukes of Argyll were closely allied to the Scottish crown and parliament, acquiring a host of official roles and responsibilities which were sustained and expanded after Union. Extensive personal papers, correspondence and accounts document the activities of the extended family in all of its endeavours, offering potential for many important historical themes and events to be explored. Until the mid-20th century Argyll Estates covered most of Argyllshire, parts of Inverness-shire, Clackmannanshire, Stirling, East Lothian, as well as properties in Edinburgh, London and abroad. Many of the Campbell lands were acquired controversially during the west highland clan wars of the 16th and 17th centuries, whilst acting as Crown mediator and overseer for forfeited estates. In the 18th and 19th centuries successive Dukes invested heavily in agricultural, industrial and urban development and the records of these endeavours provide an unparalleled insight into our landscape history and built heritage. Large areas of the estate lie in some of Scotland’s most marginal and fragile island environments (Tiree, Iona, Mull) which endured some of the worst periods of nineteenth century Highland famine, emigration and land agitation. The history of all of these places and events, and of the people within them, is documented in detail in the archive.

The collection includes a large collection of writs and charters relating mainly to the transfer of land and titles, but also including marriage agreements, commissions and appointments, contracts of friendship, inquests, gifts of ward and non-entries, letters of tutory and more, 13th – 20th centuries. The principal collection of approximately 500 charters is arranged chronologically, 1315-1784, and is summary listed. This is an important collection as it includes many early royal charters which record the progressive expansion of Campbell lands and influence from the 14th to 16th centuries. Many other charters are listed in groups and individually, throughout NRAS 1209, and a there is a further substantial collection of, as yet, un-listed and largely unsorted charters.

Records relating to the earls and dukes of Argyll’s official roles and responsibilities, 16th – 20th centuries, including three collections of political and personal correspondence from important royal, military and noble figures with whom the Argyll Family were closely associated, 1543-1800 (‘Royal Letters’ and ‘The Argyll Letters’ Volumes 1 and 2). These collections also include commissions to the Earls of Argyll, 1460-1646.

Military papers, 16th – 20th centuries, including militia lists, muster rolls, accounts and correspondence relating to military and political matters, with much on 16th and 17th century west highland unrest and on the Jacobite Rebellions. Also, records relating to the Argyll Militia, Territorial Army and the Argyll and Sutherland Highlanders, 19th - 20th centuries, and some papers relating to the First and Second World Wars (also see personal and estate correspondence).

Personal and business papers of family members, 16th – 20th centuries, including personal correspondence of the Marquess of Argyll and Margaret Douglas, 1660 and 1673, papers of the 8th Duke of Argyll relating to his term as Secretary of State for India, 1860s-70s, and letter books and press cuttings of the Marquis of Lorne (later, 9th Duke) as Governor General of Canada, 1878-1883. A large and interesting collection of family correspondence exists for the 8th Duke and Duchess and their extended family, including the Dukes of Sutherland, Northumberland and the Royal family, along with personal diaries, photograph albums and sketch books. A very complete personal archive for the 10th Duke also exists, comprising extensive correspondence and an unbroken series of detailed personal diaries, 1892-1945. Personal papers also exist for other generations of the family, some of which have been listed.

Transcripts of The Argyll Papers and related archives, compiled by Sir William Fraser, the 10th Duke and others: approximately 250 volumes and 100 bundles or folders. The most important collection, ‘The Argyll Transcripts’, contains handwritten copies of many of the earliest records in the archive (24 volumes).

Genealogies of all branches of the Campbell Family, mainly compiled by the 10th Duke and Herbert Campbell, 19th – 20th centuries, but including some earlier records.

Extensive estate archives for Inveraray; Rosneath; Kintyre; Campbell; Tiree; Mull, Iona and Morvern; Lismore and Scammadale Estates, 16th – 20th centuries. These include accounts, rentals, tacks, correspondence and other papers relating to the administration of the estates, including rural industries (kelp, salt, wool, lint, coal, quarries, woods) and infrastructure. They also include name lists, such as the Argyll Estate Census of 1779 (recording the names and ages of every person living on the Argyll Estate) and smaller scale census for Tiree (1776), and Campbeltown and Kintyre (1792). A large collection of estate maps, plans and written surveys also forms part of the estate archive.

Records of the Synod of Argyll, 17th - 19th centuries (NRAS 1209 Bundles 535-609 and 1751-1761) (84 bundles). For much of this period the Synod of Argyll covered most of the west highlands and islands of Scotland, from the Western Isles and Skye in the North, to Arran in the South; the collection covers this whole area. It contains many references to the building and maintenance of churches, manses and schools, to ministers and schoolmasters, the recruitment of Gaelic speaking ministers, and to Catholic and pagan religion. It also includes many individual items of interest including the oldest known collection of Scottish Gaelic proverbs dating from c1700 (NRAS 1209 Bundle 545).

The collection has been surveyed by the National Register of Archives for Scotland (survey numbers NRAS 6 and NRAS 1209), and NRAS 1209 is available on the NRAS online catalogue. Please contact the archivist for specific information in relation to your research.

The Archive is open to the public, by appointment, for research, Mon-Fri, 10:00-17:00. Access may be possible outwith these times for groups or special events. Email: archives@inveraray-castle.com to arrange your visit, giving at least 2 weeks notice.

The Friends of the Argyll Papers is a registered Scottish charity dedicated to supporting the development of the Archive, financially and through volunteering. Membership is open to all those who wish to share in this work. 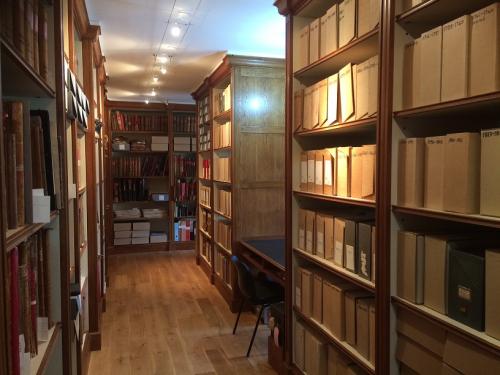