Burns & the Sugar Plantocracy of Ayrshire


For more information on the author, visit www.ericgraham.co.uk. 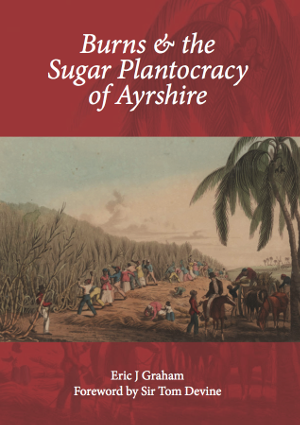 It is well-known that but for the early success of the 'Kilmarnock edition' of his poetry Robert Burns, like so many young Scotsmen of his generation, would have taken ship in 1786 for employment in the sugar plantations of Jamaica. In this illuminating study, based entirely on research on contemporary documents, Eric Graham has pieced together the strange world which the Bard might have entered if good luck had not smiled on him.

Only now is the story of Scottish involvement in the Caribbean economy starting to be told in full detail. It is one of the darker episodes of the nation's history. Though the Scots were not much concerned in the direct transatlantic slave trading in which Bristol and Liverpool specialised, they were deeply involved in the plantation economies which could not have existed and flourished without a pitiless system of chattel black slavery. In Jamaica, for instance, Scots were preeminent as plantation owners, overseers, bookkeepers, soldiers and physicians. It was a society governed by greed, the lust for profit and the unrelenting exploitation of many thousands of hapless slave labourers. As one observer remarked: the state of society in this place is as low and degraded as it is possible to conceive - a perfect Sodom!

Dr Graham examines the involvement of some of Ayrshire's social elite in the Caribbean. He shows how it was commonplace for younger sons to seek their fortunes on the islands of the British Caribbean. If they survived the lethal tropical diseases, which gained for the West Indies the unenviable title of ‘the white man's grave’, the aim was to make money quickly and return home to Scotland with the profits - living out the rest of their lives as members of the landed gentry. So it was that riches obtained from the slave plantations that fuelled estate purchases and financed agricultural improvement in eighteenth century Scotland.

The picture that Eric Graham draws could be replicated in many other parts of the country. But, by providing a detailed case study of Ayrshire's links to the eighteenth century transatlantic empire, he succeeds in adding important pieces of invaluable evidence to an aspect of our history that many generations of Scots preferred to forget.